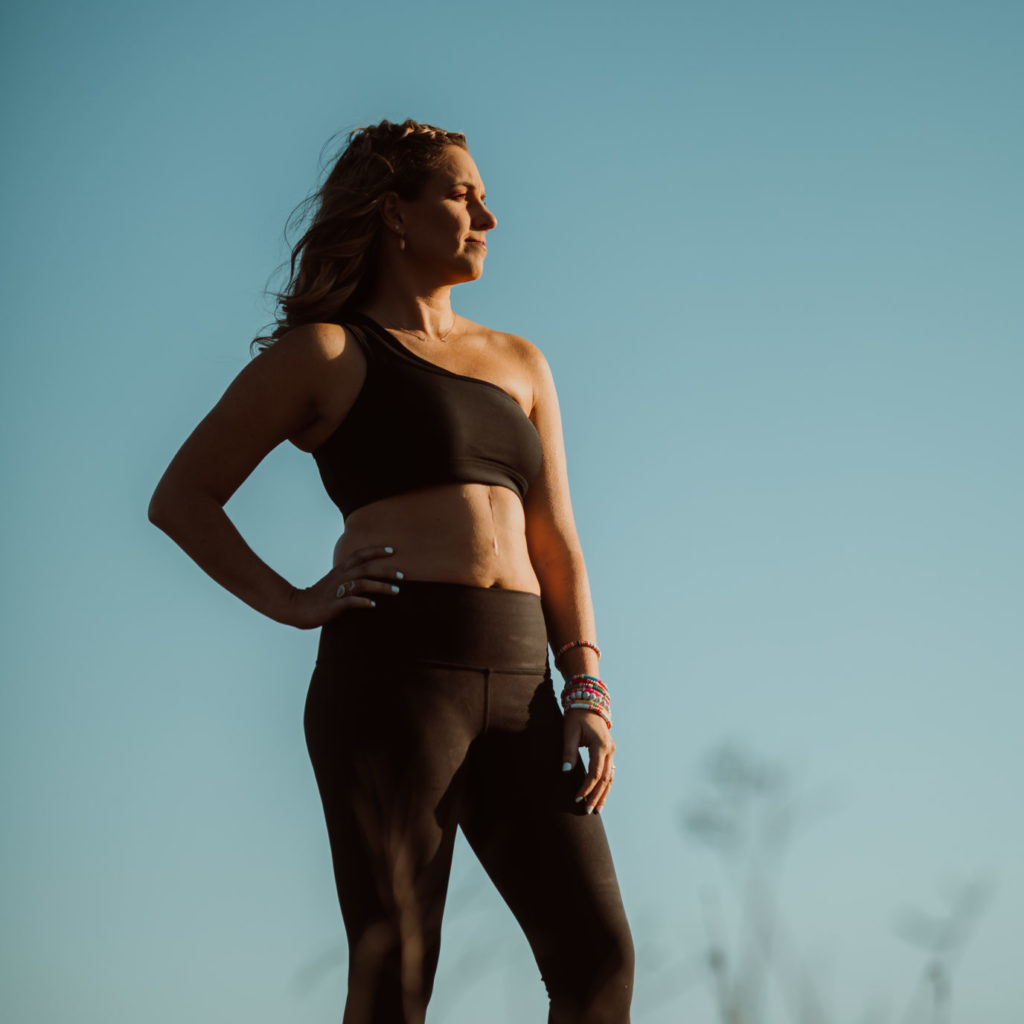 Becky is a physical therapist and loves using her knowledge to help people create their best physical life knowing they have to work even harder to conquer the mental aspects of cancer. She loves teaching fitness classes for cancer survivors enjoying their community support at the same time.

I’m alive. I am kicking cancer’s ass everyday.  As for the doing it while being pretty, I guess that is all in the eye of the beholder.  I occasionally ask my husband if I am looking “cancerish;” he never misses with responding “you are beautiful.”  That had to be difficult when I was bald and 8 months pregnant.

I have stage 4 synovial sarcoma.  The equivalent of hitting the cancer lottery of bad luck.  Initially diagnosed when I was 5 months pregnant with our 3rd child; having recently been relocated for my husband’s job.  Several months of chest pain and fatigue had been chalked up to pregnancy related reflux.  Then a diagnosis of an unknown infection. Finally; however reluctantly, cancer.  A tumor the size of a softball.

The next 6 months is a hazy blur.  First, a surgery to remove the huge tumor settled in the lining of the lung.  A hero of a husband who asked for a job transfer and sold a house while commuting between states. A saint of a mother who opened her door for a family of four (almost five) for help with childcare, a newborn and a cancer patient.  There were 2 rounds of chemo deemed necessary while pregnant to have a shot at saving us both. Followed by a scheduled induction at 35 weeks.  Miraculously, Ethan Matthew was born on September 22, 2014.  Although, he had to hang out in the NICU for 2 weeks, he was discharged beautiful and healthy.  We had 1 week home together before I returned to the hospital to begin an additional, more intense, chemo regime.  6 days of inpatient treatment followed by 2 weeks of recovery at home. Then repeat.  Rounds 3 and 4 were essentially a nightmare. Bonding with our beautiful newborn was minimal, I barely had enough energy to get out of bed. I had to be lured into round 5 with the hope of canceling round 6 and a promise from my husband not to leave my side.  A difficult task to accomplish given there was a job to hold down and three kids at home to nurture.  Round 5 was as awful as anticipated and landed me in a 48 hour coma.  Then there was Christmas, prayers of gratitude for health, family, friends and a clean, cancer free scan.

There was 8 glorious months of cancer free joy.  I made up for lost bonding time with Ethan.  Enjoyed time with Garrett (6) and Addison (3), got stronger and returned to a job I loved.  We bought a house.  We bathed in the post cancer glow of health and began putting our lives back together.  My hair, at least on my head, returned!

A routine three month scan in August 2015 brought news of a small met.  Strangely, cancer had shown up in my right adrenal gland.  I felt defeated.  Not because of a reoccurrence, but because this was the scan that I felt the most positive about walking into it.  I was the strongest I had been in a year and a half, but cancer didn’t seem to care.  My first relapse was a lot harder to handle mentally than the initial diagnosis, but that is a story for another day.

Since that relapse, I have participated in a phase one clinical trial (twice), radiation, three more types of chemos and several surgeries.  It’s been a rollercoaster both physically and emotionally.  I’ve made tough treatment decisions and ultimately been very proud of myself for continuing to fight.  I’m here.  I’m alive.  I’m thankful and I would like to share my story in any capacity to help others through their battle.  Welcome to our story.